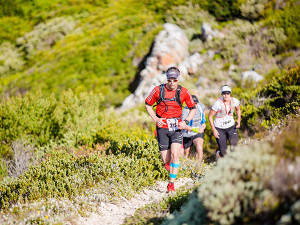 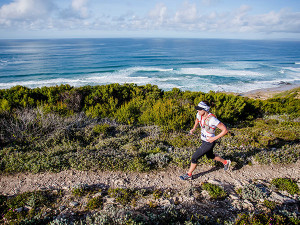 Sabie-based athlete Carine Gagiano may not have won a stage, but the Nedbank Athletic Club runner produced 3 days of consistent running to become the first woman ever to take the overall honours in the 2016 Oystercatcher Trail Run. Her winning margin was just 32 seconds. In 2nd place was Arnold Smit, with an unlucky Nelius Swart settling for 3rd, after inadvertently taking a wrong turn on Sunday’s final stage.

The race saw 3 days of almost perfect weather conditions, with cool temperatures and partly cloudy skies greeting the athletes as they departed the base at Fred Orban’s Sandpiper Sports Centre, each morning.

Day 1 was from the Gourikwa Nature Reserve to the Gouritsmond jetty. The 25km stretch saw the athletes running inland via the Ystervarkpunt lighthouse, before running alongside the coast and enjoying the magnificent trails of what is rated as one of South Africa’s top 5 hikes. The water point at the Eco Marine Lodge was a highlight thanks to the now traditional freshly baked ‘roosterkoek’. Nelius Swart took the stage win on day 1.

Day 2 saw the runners facing a 20km stretch from a Gourits River farm to the Sandpiper Sports Centre in Boggomsbaai. This was the most technical of the 3 days, mixing up sand with a long stretch over small, ankle-rolling boulders that have caught out a few athletes in the past. The water point at the Fransmanshoek was once again a highlight, with magnificent views over the sea.

The final day started at Dana Bay 2nd beach and made its way via Pinnacle Point to Mossel Bay along the dramatic St Blaize hiking route, where the earliest evidence of modern man was found. With her consistent performance each day Carine Gagiano was 1st overall with Arnold Smit 2nd and Nelius Swart 3rd.

A huge thank you to Fred Orban and the Sandpiper Sports Centre, Halfway Toyota George, First Ascent, Gourikwa Nature Reserve, Eco Marine Lodge, Jakkalsvlei Wine Estate, Boss Tea and Glenhoff Craft Beer for their support. Entries for 2017 will open on 15 October and is limited to 150 runners. See more results and photos on www.trisport.co.za