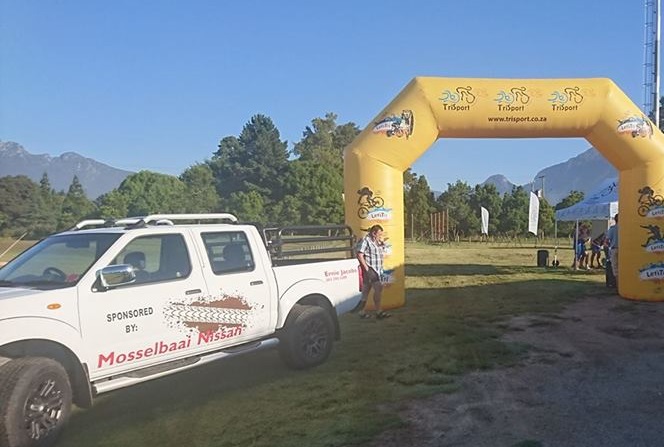 The Garden Route is renowned for its natural beauty and the NMMU campus at Saasveld, which played host to these events, is no exception. Lush green vegetation and thick undergrowth as well as an abundance of bird- and wildlife make this area a feast for the eyes. The Groeneweide Trail Run is predominately located on the pristine SANParks property at Saasveld and runners could choose between a 12km and 7km route. More than 95% of these two routes are on forest single tracks and paths used by woodcutters.

Entrants of the Garden Route Duo Challenge joined the Groeneweide runners as the first part of their challenge after which they got on their mountain bikes to explore the single and jeep tracks around the Garden Route dam.

The runners for both events set off early on the morning of 30 December 2016 from the Saasveld NMMU campus. In the 12km event, the first runner to cross the finish line was Ryan Eichstadt with a time of 0:56:36. Ryan is no stranger to TriSport’s events and finished third in the solo open male category of 2016’s full RCS SOX. Hot on his heels was Niel Swanepoel finishing in 0:56:37 with another open male runner in third – Pieter Henning (1:00:41).

The junior runners dominated the 7km event, with the top 3 all being from this category and all finishing well under one hour. Here Diwan van Rooyen was the first to cross the finish line in a time of 00:41:11, with Bartho Visser in second (00:43:55) and female runner Helette du Plessis in hot pursuit with a time of 00:44:09.

After running the Groeneweide trail entrants of the Garden Route Duo Challenge tackled the second leg of this event. The main duo event consisted of the 12km trail run followed by 24km of cycling while the lite duo involved 7km of running and 15km of cycling.

Thank you to all the athletes who made our last event of 2016 such a great one, we couldn’t have asked for a better way to end the year. And also a very big thank you to our vehicle sponsor Mosselbaai Nissan for their support at TriSport’s December events.