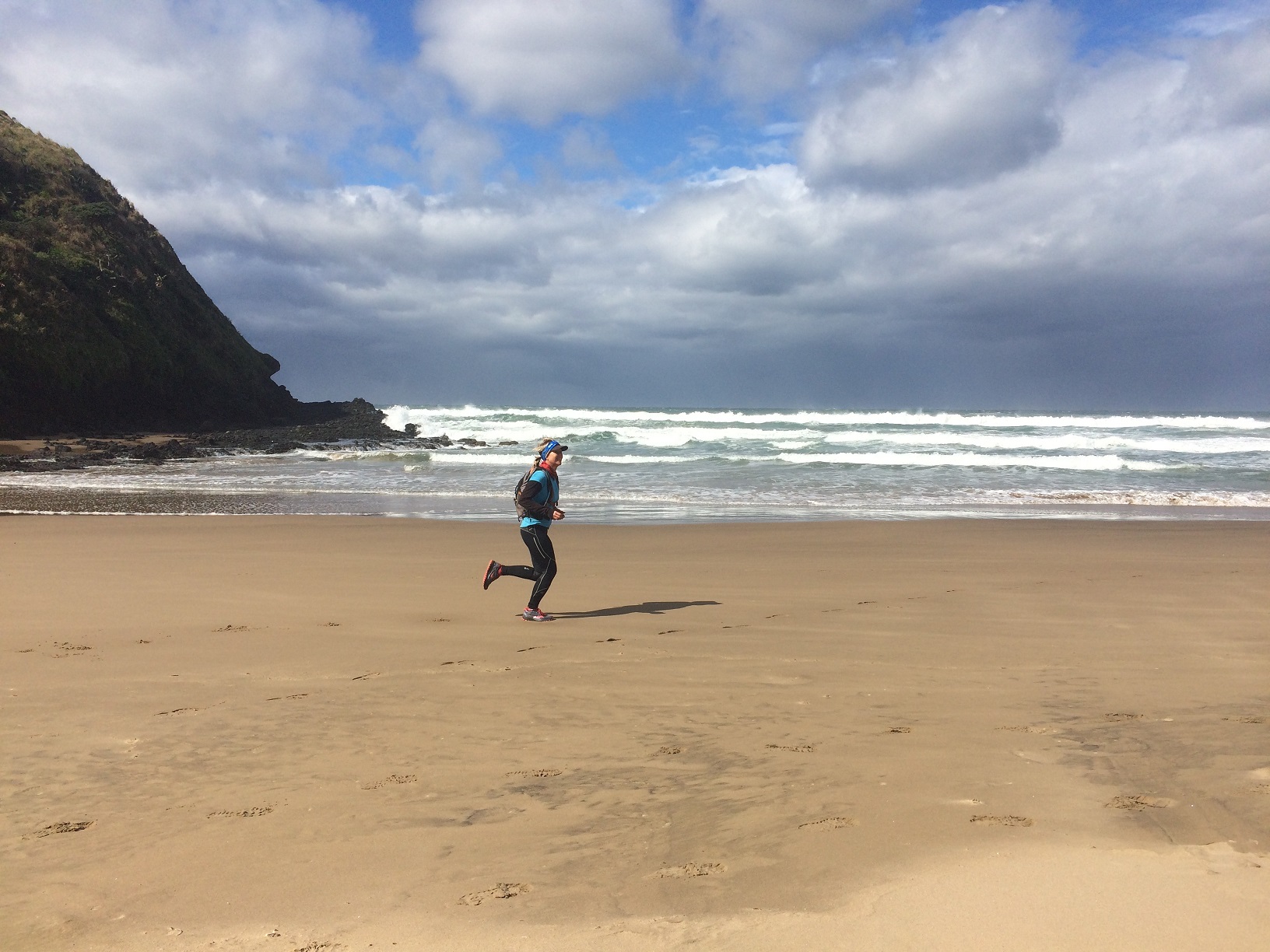 Belinda in her happy place

This looks like an amazing adventure. Not a race – just swimming in rivers, under waterfalls and lazing on an off-day. Very few entrants, but I have made contact with three people coming from KZN. I am going to fly up to East London and hire a car to Port St Johns. I have been to Mkambati before – it is an incredible part of the world. Epic adventure – you keen? B xx’

It took me all of two seconds to hit reply and say yes! I’d worry about training for my first proper multi-day event later. The Pondo Drifter is not a race but rather condenses a five-day hike on the Northern Wild Coast into three days of running (18km, 26km, rest day, 25km). What sold it to me was the rest day, this I could do. In the months leading up to our departure life, work, kids and boyfriends sucked up training time and the recommended back-to-back training days didn’t happen. Well at least not for me. While I kidded myself that the Merrel 5.5km Night Series was ‘speedwork’ and my regular Saturday morning 15 km trail run enough ‘time on my legs’, Belinda was merrily winning her age category at the inaugural TrailGirl weekend and loping along the Tsitsikamma Trail. A few weeks before we left disaster struck – Belinda got chicken pox and strained a calf muscle and I caught a chest cold.

We boarded the plane for East London having not run at all for two weeks and not entirely sure our bodies would remember how to. Getting to the Wild Coast from Cape Town is a bit of a schlepp and the drive from East London to Port St Johns in a tiny rental car an adventure in itself. Speedhumps appeared unmarked out of nowhere (the Slingsby Wild Coast map does have them in red capital letters but I thought he was joking), cows and goats sleep in the middle of the road and overtaking on a blind rise is the norm. But we made it to our pick-up point, Cremorne in Port St Johns, where we met run organisers Hanno and Sonja and logistics team Patrick and Janice. After waiting a bit for the KZN crew, who had missed an important turnoff, we were taxied to the Drifters tented camp at Msikaba. Taxi talk was the usual trail runners sussing each other out: race dropping and injury/lack of fitness comparisons. Belinda and I approached pre-dinner run briefing really worried, the KZN crew had run many Comrades and for other runners this was their third time on this trail.

Belinda strapped up her injured calf with Transact and a compression sock, I puffed on my inhaler. We ate an enormous bacon and eggs breakfast finished off with home-baked bread and apricot jam, covering both banting and carbo-loading just to be safe. And then we were off on grassy cattle tracks over rolling green hills. Within an hour the pack had naturally split into three groups with our local guide, Mbazo leading the front runners, Sonja leading the middle group and Hanno at the back with the ‘fun bus’ of Comrades runners who turned out to be of the ‘slow but steady, can run forever’ variety. Every now and then a front runner would run off down the wrong cattle track and Mbazo would whistle and point her in the right direction. Our waterpoint was around 10kms in at Lambasi where we stuffed cheese scones and tea into our still full tummies and then waddled down the beach for the next 8kms. Little Goss provided a welcome opportunity to strip off and swim across the river, it was about 32°C and the swim was a game changer for me. In what felt like five minutes we were at Luphuthana with its incredible wild ocean spray as the famous swell hits the rocky ledges. That night the predicted cold front hit and Belinda and I lay awake as gale force winds battered our safari tent.

By morning the wind had died down and we were all in warm gear and waterproof jackets ready for the most scenic day. Lots of selfie opportunities passing the rock formations of Top Hat and Cathedral Rock, swimming pools on the Mlambomkulu river, Waterfall Bluff and the hidden Mfihlelo Falls that fall into the sea. We battled a headwind to Mbotyi, our waterpoint, where coffee was waiting. This was a dig deep day for me and I was kept going by Mbazo’s stock answer of ‘maybe 20 minutes’ every time someone asked how far we were from something as well as ‘let’s do it’ to get us going again. We battled the wind up to Manteku and were nearly airborne as we crested the hill. But then joy of joys a steep, sandy descent into the forest to the banks of the estuary where canoes were waiting to ferry us to camp. Hot shower, mushroom soup, cheese and tomato toasties and we were as good as new.

‘Party time’ was declared from 5 to 9 pm, we swopped war stories at the dinner table, drank as the next day was a rest day and fell into bed 5 minutes after 9 pm.

We spent our rest day exploring the mangrove forest, beach and canoeing up Manteku estuary where we saw Malachite Kingfisher and Fish Eagles fishing right in front of us. The last day needed an early start to make low tide for our river crossings so we layered up to keep warm before our sunrise start. Lots of beach running on this day as well as big grassy hills, dirt roads through villages and gorgeous, vertigo-inducing cliff scrambles. We refuelled on salt and vinegar chips and coffee at our waterpoint near Poenskop, 14kms in, and then were like horses heading for the stables on the last 11kms of deserted beach and a little dirt road to Port St Johns. Hot showers, burgers and milkshakes were waiting at Cremorne on the banks of the Mzimvubu River. All too soon it was over, our bodies had held up, our self smack-talk was unfounded and on the way home we were already thinking about the next adventure.