So it was a tough decision trying to decide what to do on the weekend of the 23rd/24th May – either the Magalies Monster MTB & Platinum trail run or the 2 day Save the Rhino Trail run… So I eventually decided to give the Save the Rhino trail run a go since I had done the Magalies Monster MTB many times before, even though it is one of my favourites! 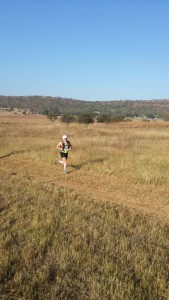 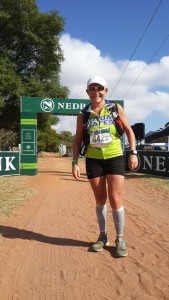 Being part of Team Mutual Safes where we “Race against Rhino Poaching”, the “Save the Rhino” trail run definitely appealed to me.  We have a number of team members all over the country and every km we race in the Mutual Safes kit, we raise money for our Rhino fund.

Friday afternoon my hubby and I hooked up our camping trail and off we went to Ruby Cliff’s Horse Ranch, Loskop Dam – the host venue of the race.    Arriving in the dark, we could not see how awesome this venue was but when we awoke the next morning and the sun came up I knew we were in for a treat of trail running!

Saturday morning saw a bunch of keen runners line up for day 1, about 27km of trail running – the route was very scenic taking us up and down many mountains on mostly jeep track – the views were stunning from the top and we even saw some bokkies on the way!  Knowing we still had to run a good 25km on Sunday I had to try pace myself to keep something in the tank for Sunday, I had a good run and managed to finish first lady for the day J.

Saturday night we had a very sociable dinner in the hall with all the runners (made some new friends) and saw a slide show of pics of the day from Terance Vrughtman – an exceptional photographer and some really awesome pictures!

Sunday morning was a hive of activity as more runners had arrived to participate in the one day event – an option of a 10km or 25km and a kiddies race.  Race briefing was done and we were told of the awesome hiking trail we would be running on with swinging bridges, river crossings and waterfalls we would pass.   Just after 8am we set off on the roughly 25km stage 2, after a fast-ish 4km on gravel road we turned off onto the mountain biking single track and the fun began.  We ran mostly on single track until we got to the start of the hiking trail we would run on – 4km of fun! Ups and downs, swinging bridges, river crossings and some big rocks to negotiate – it was once again spectacular scenery with alotta rock pools one could spend all day at!  Once off of the hiking trail we continued on the mountain biking single track and had some real fun downhill sections J. Nearing the finish there was a slight sting in the tail as we had a bit of a hill to negotiate before we got to the end of a great morning of trail running.  I had a great time running with Lerentia most of the way on day 2 until just before the finish when I just could not keep up with her long legs on the downhill’s.  I finished 2nd lady on day 2 to Lerentia by a mere 28 seconds but my lead from day 1 ensured I still won overall.

A win must never be easy, so well done to Lerentia and Adel for rounding up the ladies podium and making me work for the win.

Thanks to Debbie, Sonja and Hano for a really great, well organised event – definitely one to put on the calendar for next year!  Thanks also to the staff of Ruby Cliffs who were so great as well as Nedbank for sponsoring the event.